I am writing this post with a dream and an idea. Though it can still go horribly wrong. But I was called to sit on jury duty this week, and I have some time to kill because I can’t leave this room–possible for an entire week. So I am drafting this post without actually knowing if this project will work. But it’s so simple it has to work, right? I mean, I only need sticks and hot glue. What can go wrong?

So this is what I am going to try and do today when I get home from jury duty: I am going to make star ornaments out of twigs. I am going to brave the bitter cold and go outside and forage some smallish branches and twigs. I will curse the cold and the fact that I was too lazy to do this in the fall when the damn twigs were not covered in snow and it wasn’t nine degrees outside.

In a feat of self-delusion, I will think that making a star is easy. I mean, I’ve been making them since I was, like, five years old.  I will intend to do many, but will probably cobble together just one, which I will then spray paint gold to hide all the defects.  And add glitter. Lots of glitter.

How did this turn out? 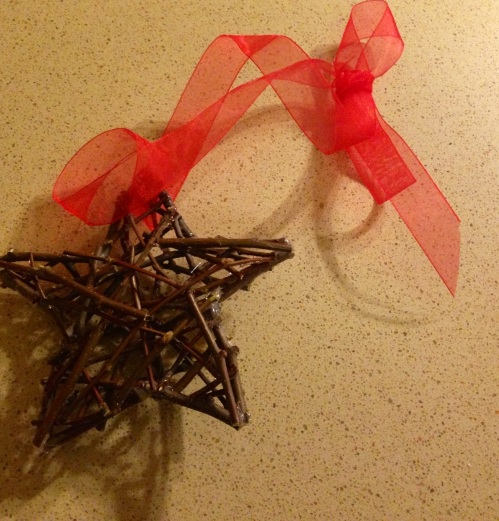 Not too bad. If you don’t look at it too closely, that is. Hot glue is kind of blobby. 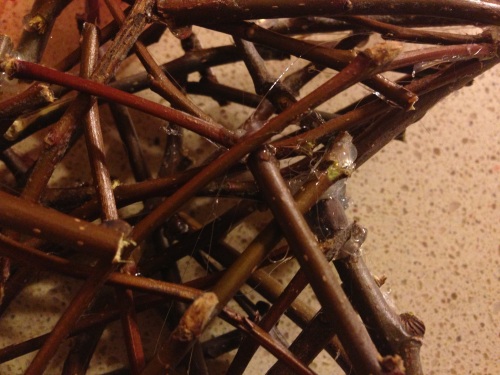 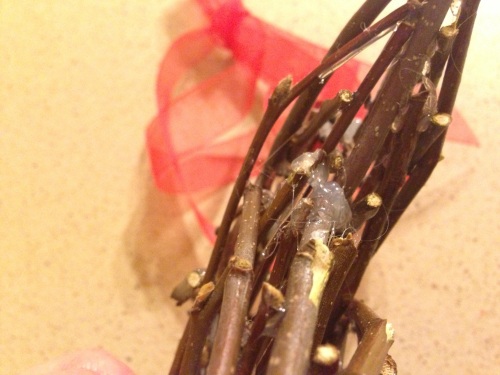 I was, indeed, annoyed that I waited to do this project when everything was covered with snow.  I though about collecting the twigs many times this fall as we were pruning branches. But I didn’t.  So instead, I rushed outside to the unburned burn pile, snapped some small branches and twigs with the leaves still attached and ran back inside.  My pile was kind of puny. 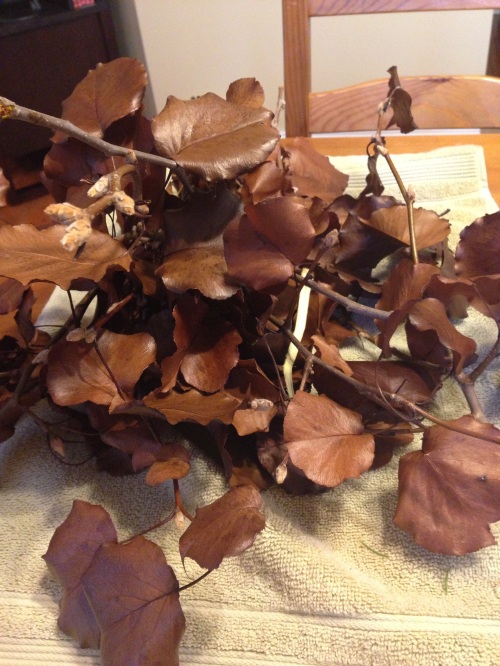 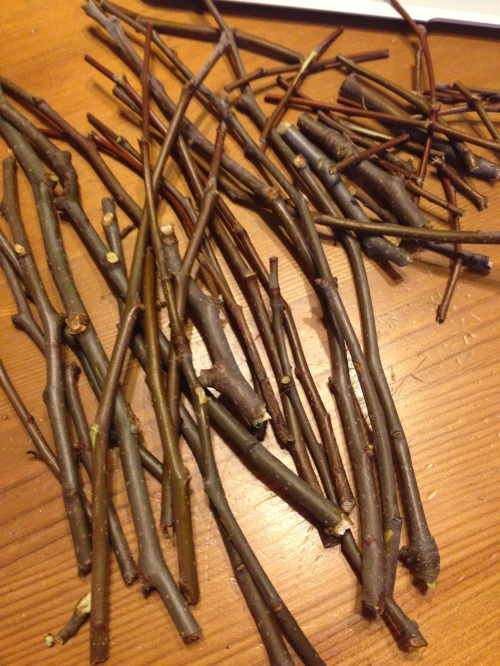 The pile of sticks and leaves eventually became a pile of sticks of varying sizes and lengths. I kept even really short pieces knowing I was going to try and fill in the star. It started out a little uncertainly. I have to admit I really dislike working with hot glue. It’s hard to control, leaves “strings” behind and dries milky.  Getting all 10 joints glued together, without gluing the towel underneath, was challenging.  As I held up the star triumphantly after the last joint, it was really wonky.  The joints were not stable and I  thought I had to scrap the hot glue because it wasn’t working. I went in search of wood glue. Bad idea! Do you understand how long you would have to hold pieces together to get them to stay?  So back to the hot glue.  It’s the only way to do this project in a reasonable time frame.  It just turned out I had to be more patient.

I think I can get better at this and plan to make more. After I let myself be patient, and actually waited for the glue to dry, I realized that I could use less glue. Because of drying time, though, making one star can still take a while. an assembly line type of system would work, though for making two or three at once.  I thought my mound of sticks would yield more than one star. But adding the “filler” in was a bit addictive so I kept using up my sticks.

In the end, despite my setbacks, I think it turned out nicely and my next one will be even better. I may not even have to paint them gold and cover them with glitter! I haven’t decided yet. They look rather nice in the nude.

This entry was posted in Every Post on this Awesome Blog, Your Creative Health and tagged Christmas, craft, decor, glue, holiday, nature, star, twigs. Bookmark the permalink.